How can LEDs just keep getting brighter and brighter? We’re not sure how, but DDM Tuning seems to have figured it out, and has as of this review nailed the top positions for LED products.

The ProX V2’s are even brighter than their successor in both reflector and projector style headlights, and yet run at a lower wattage, landing the #1 position in both categories. Looking for the brightest LED on the market? Look no further and read on.

LED replacement options can be a great way to replace the old halogen bulb in many ways.

The ProX V2s performed extremely well in a reflector style headlight at an incredible 1288 lux in the low beam (vs 373 lux for a halogen, and around 500 for some of the top performing halogen bulbs running at a higher wattage). This translates to nearly 3.5X the distance over halogen on the main beam, or 245% additional lux to be exact. 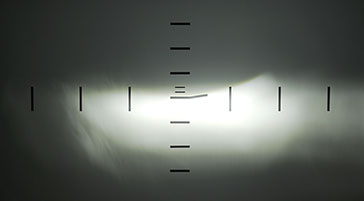 High beam performance was no exception here, as they performed equally well. Tested performance was 1973 lux, or +125%/2.25X the distance. High-beam upgrades are always questionable pending on your use, so you’ll have to weigh the benefits yourself. If you have the need, moving to an LED will greatly improve visibility on backroads or empty roads where it’s needed by providing further distance, whiter light, and instant-on maximum performance. 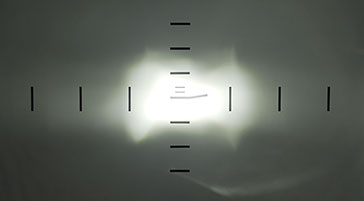 Beam performance is good at a rated 4 stars (subjective). Glare is minimal, and only a few lux higher than a halogen based on our test housings. We presume this is due to the extremely high output which is to be expected. The only recommendation is to simply ensure you check your beam cut off, and if it is higher after upgrading to the LEDs, you’ll want to lower them as needed.

When it comes to upgrading your halogen reflector headlights, the ProX 55W Accu/V2s lead the pack (as of this review).

Looking to upgrade your halogen projectors? The new SaberLED ProX 55W Accu/V2’s are FAR ahead of the pack here, at an overall rated 5.8 stars, compared to the #2 spot at 5.1 stars (as of this review). We have a feeling that nothing else will come close to this for quite some time.

We tested them at 683 lux in our low beam projector, and they performed on the top across other halogen projectors for validation testing as well. This is nearly 3X the distance at 197% additional output. Most other products fall short due to how LEDs are designed, which limits them in these applications, but the V2s are so bright that they work very well.

High beam performance is where things get even more strict, as the light must be aimed upwards. Not a problem for a halogen or xenon bulb, but again because of the LED’s diodes only facing left to right, poses a problem. Well again, not really a problem for the 55W V2s, as they put out 722 lux in our high beam projector, the highest yet. This gives the driver a nice 64% additional distance, the most you’ll see out of an LED product. As we mentioned in a reflector high-beam application, LEDs provide an instant-on with their maximum achievable performance right at the start, whiter light, and of course further distance with more overall light (more on lumens below). So while the 64% is not as great as low-beam performance, there is still good benefits to upgrading a high-beam halogen projector.

Beam performance when it comes to a projector style housing is always tricky for LED, but the ProX V2s did surprisingly well, and scored a 4.5 stars with very little cut in near the bottom (dark area), which translates to a good usable beam.

Color temperature is highly subjective, and everybody seems to have a different opinion about what the ‘best’ color is. Halogen will be around 3500k, which is a mild yellow tone in the beam. OE HID is closer to 4300k. More white, but still a small tone of yellow. LED is typically closer to 6000k providing a blue tint to the overall white beam.

The color coming out of the 55W Accu/V2s are mostly white with a small hint of blue at 5650k overall. We rate 5000k at a pure white, and 6000k with a small blue tone, and these are right in between with a good usable color in all driving conditions. 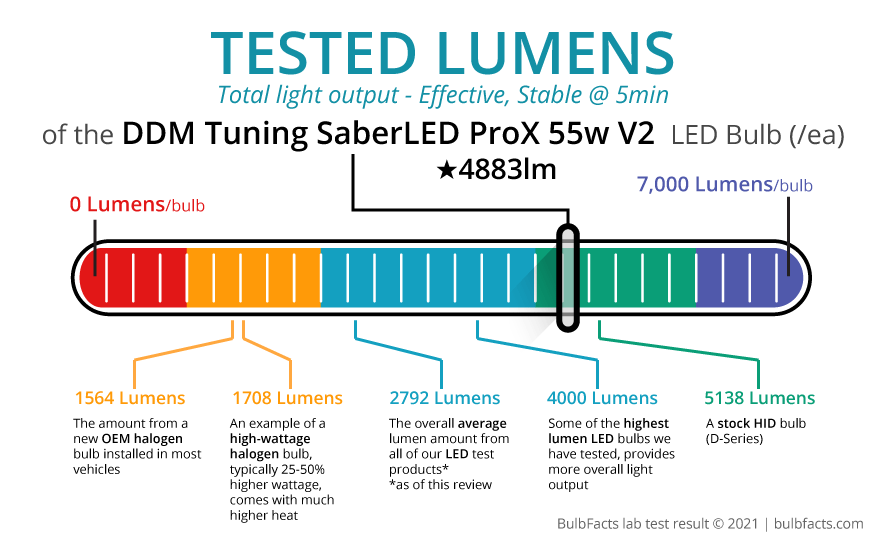 BulbFacts used to exclude lumens from our scoring, but have added the tested lumens into the overall score due to the importance of ‘overall’ light to many people. Think Lux as distance, and Lumens as total light.

So how did the ProX V2’s perform? They put out a stable 4883 lumens (per bulb) at 2 minutes, and 4764 after 30 minutes. Only about a 2% drop after long warm-up which is great to see, as many lower quality LED kits drop much higher due to poor cooling and poor diodes. DDM claims 12,500 lumens for the kit, and while the combined 9766 is a bit off from that claim, it’s still an incredible amount of lumens compared to most other LEDs, and of course a set of halogens at around 3000 total lumens typically.

The power drop was extremley low. From initial warm-up to 30 minutes of runtime, the SaberLED ProX 55W Accu/V2 experienced a 2.1% drop in output*.

*Lumens are tested at initial startup (typically much higher as expected), 2 minutes (initial warm up), and 30 minutes (full warm up). The percentage value comes from the difference between 2 minutes and 30 minutes. When it comes to the diodes, more and more brands are concealing what they are using due to competition mirroring them. DDM is no exception here. They used to advertise what diode were used, but there seems to be more and more customized diodes (“Customized Auto-Grade LED chips”) these days, thus we are unsure what is being implemented in these LEDs, but whatever they are using, it’s working well.

Power draw is higher for a typical LED, but it goes in-line with how they perform, as expected. Our tested wattage was 47.8, which is actually lower than the previous generation 1 model. Not to worry though, as temps stay low at 123°F (50.5°C) which is again lower than the previous model. Well below any concern level, as halogen runs around 160°F (71°C), and most headlights will withstand temps upwards of 300°F quite easily such as when the sun is beating down on them for example. Many people ask about the fan as well, but keep in mind that the fan is simply to keep the diodes as cool as possible for maximum output, as heat directly effects LEDs.

If you are in a vehicle with a CANBUS system which checks for bulb-out errors, you may or may not receive an error. On our test VW (MK6) we received an error, however in a newer GMC (which are always problematic) we didn’t experience any issues. These systems differ in how they check the expected halogen bulb, so we suspect since the EU vehicles do a pulsed initial check, this threw the ProX 55W V2 off. It’s a good idea to add a set of decoders which will resolve this problem, but keep in mind that they do require more space for the install.

When it comes to noise and reverberation, we experienced nothing out of the ordinary, as they are on-par with most other products. The fan seems to spin pretty quickly, presumably to keep the high-running diodes cool. Noise at the LED came in at 68db.

Don’t expect the ProX V2’s to dim down to work on a DRL. We checked them on our linear PSU and they would not power up at 6 volts and required 7.5 minimum to fade on. Some vehicles run higher while some run lower, so it’s safe to say they won’t work, but it’s always worth a try, just don’t expect them to power up.

Most of the sizes available have the ability to clock (BRI Source lists all sizes) which is great to see. Typically not a concern as the LEDs are designed to fit properly in the application size’s halogen bulb they are replacing, but in some cases the halogen bulb is clocked on an angle for some reason, and this causes the LED to do the same. In those rare cases it’s nice to have the ability to make some fine tune adjustments. In any case, ensure that you check your beam pattern both before and after the LED changeout to ensure the beam is correct with a strong hotspot, and minimal glare.

Size is average at 40mm wide and 79mm tall for the LED, and 61x34x18mm for the external driver (which is not detachable or removable by the way). They should fit into almost all applications, but it’s best to check first to ensure nothing will get in the way. In any case, be sure you can re-seal the dust cap (if you have one) for sealed beam applications. The unit is designed to run outside of a headlight and fog-light as well so you don’t have to worry about them getting wet.

DDM’s warranty on their LEDs seems to be 2 Years across the board, which isn’t the longest, but it’s not the short 1 Year you get with some other brands. We have received feedback from some viewers on their experience with DDM Tuning and it always seems to be a great one, so we feel good about recommending their products. We have had no issues with our purchased samples ourselves, even in extensive testing.

Should you pay the extra money ($190 MSRP) for the ProX V2 over the Pro V2 or any other LED? Well if you’re looking for the very brightest in an LED, the ProX 55W Accu/V2s are it.

For a reflector style application, we would recommend considering the little brother SaberPro 50W Accu/V2 ($160 MSRP), as they were not too far off from the performance and are a bit cheaper.

However for a projector application, we wouldn’t recommend anything else as these shine further than another else by far, and provide more overall light for your nightly driving needs.

All in all, the new ProX 55W V2s are an incredible product. You won’t find anything else at this performance for the price. Check out BRI Source as they offer free Priority Shipping.