In this one we’ll be reviewing the DeAutoKey (or DeAutoLED) LED headlight kit. We’ll also take a look and compare with some Amazon LED kits, DeAuto’s H7RC HID kit, and of course with the original halogen incandescent bulbs that come stock in your car. We tested all factors including the brightness, beam pattern, and color temperature, and want you guys to have all the information possible before upgrading or spending a dime! 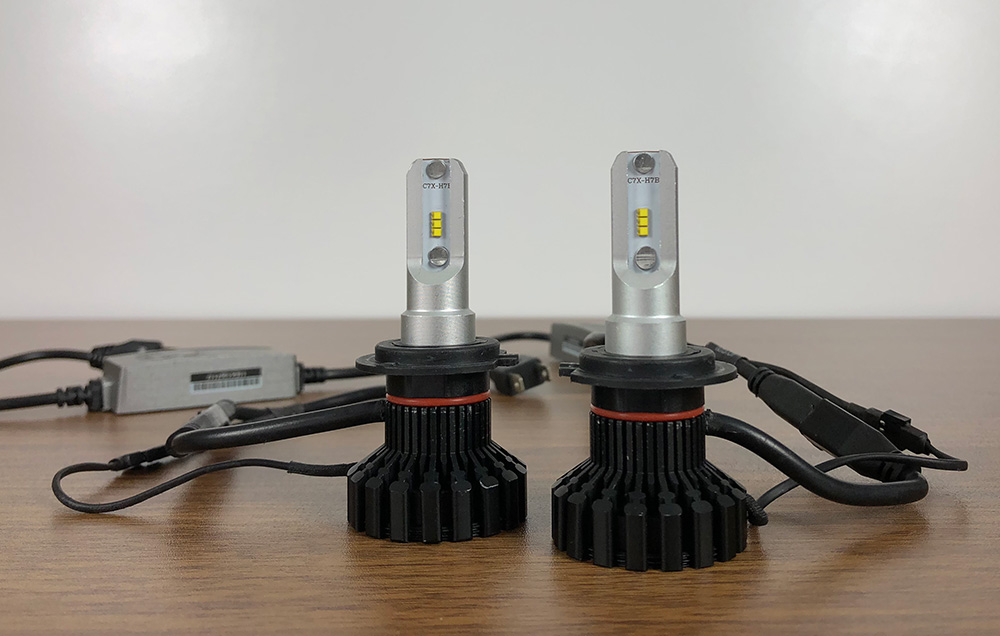 So if you notice, this kit comes in the H7 size, as well as H4, H8, H11, 9005, and 9006, and is specifically designed for VWAG vehicles (VW, Audi, Porsche, etc.) from DeAuto, but if your car or truck takes any of those sizes it should work equally as well. They won’t trigger any errors on your dash, a definite plus. 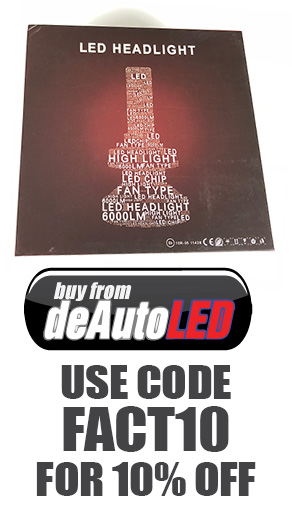 Installation is very easy. Compared to an HID kit, since there’s less components, it’s a bit easier. Compared to a normal halogen bulb, there will be a few more steps involved. You may need a special adapter if you have H7 for example, but check the online forums for your vehicle model, or give Amazon search a try.

The first test aspect I want to talk about is beam pattern in a reflector housing. The reason being is because it’s so important to get the light in the right spot. Many Amazon LED kits for example do such a horrible job of this, as the LEDs themselves are normally not positioned correctly, although they are very bright, they don’t put light to the road and instead spread it around scattering light everywhere, and most importantly blinding oncoming drivers. The DeAuto LED kit here as you can see mimics a normal halogen bulb’s filament, and performs very similar in a reflector headlight, but at a much brighter intensity. It’s a win-win. 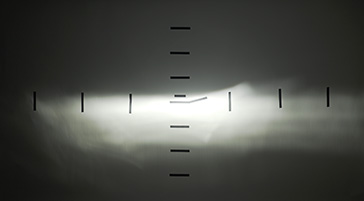 When we purchased a number of Amazon LED kits and tested them out, we were both shocked and surprised. Most faired close to stock halogen, not much of an upgrade, and scattered light. A few actually performed very well (such as Lightening Dark LED as of this video, but they are no longer available), but the DeAuto LED kit performed even better. The DeAuto LED tested at 7080 peak lux (per bulb) at 12’ distance in the low or main beams. That’s 340% MORE light, and almost 4.5X brighter than your stock Halogen bulb. If we compare them to the Brightest Amazon kit we have tested so far the Lightening Dark’s, they are exactly 168% brighter than those in the low beams. How do they stack up against the most popular rated kit on Amazon, the Cougar Motor LEDs? They were 325% brighter than those. If you are familiar with the DeAuto H7RC HID kit, these are going to be about 490% brighter than stock halogen, and 150% more light than the LED kit. Check out review on the HID kit here. You might ask, what if I just upgrade my halogen bulbs to a better set? You can certainly do that, but the peak brightness and distance is still about 300% brighter. 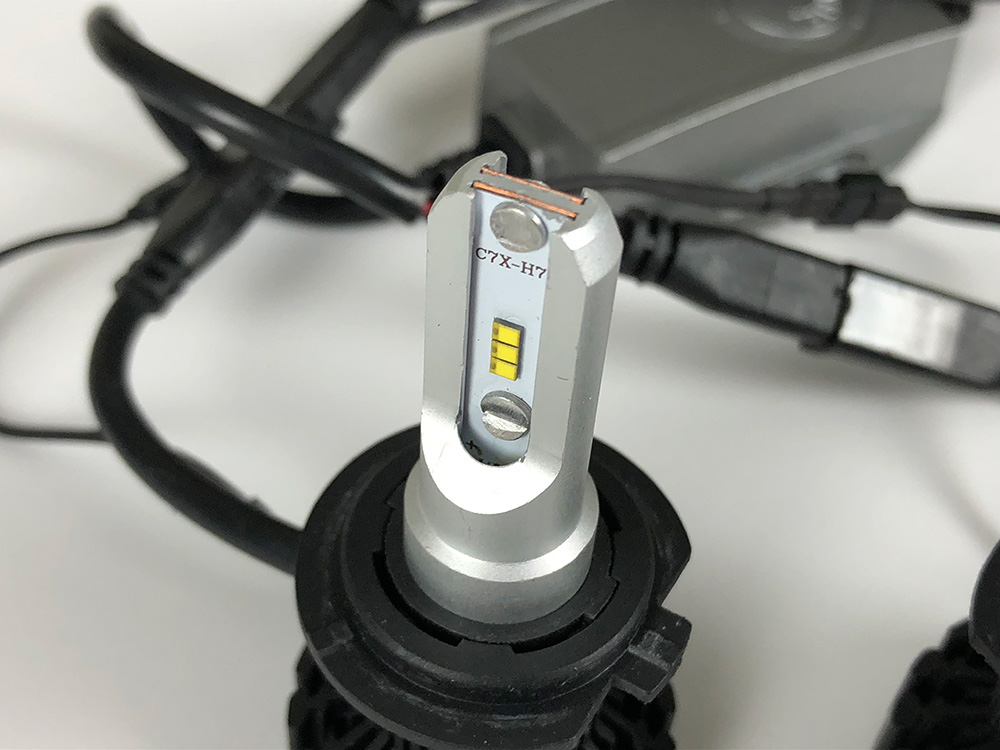 Moving into color temperature, the DeAuto kit claims 5500k, but we tested them right at 5700k which was pretty close. They are very close to a pure white color, with a slight hint of blue. If you put them side by side with stock halogen bulbs, you can see how much whiter they look, making your car look a bit higher end at the same time. The average color temperature of an original halogen is around 3300k, so that’s +2400k. The Amazon kits all had a very blueish color at no less than 6000k, with most closer to 6500k+. If you like the blueish color go for the Amazon pick, but if you want a cleaner white color grab a set of DeAuto LEDs. Remember too, that going to a very high color temperature makes it a bit harder to see during bad weather conditions like snow, rain, fog, and so on. 4300k is used on OEM HID bulbs, as they are the best overall color for various conditions, but a higher color closer to 5000k is best for clear driving. Kelvin is only color, but it does make a difference visually how the light cuts through the air and bounces off objects. 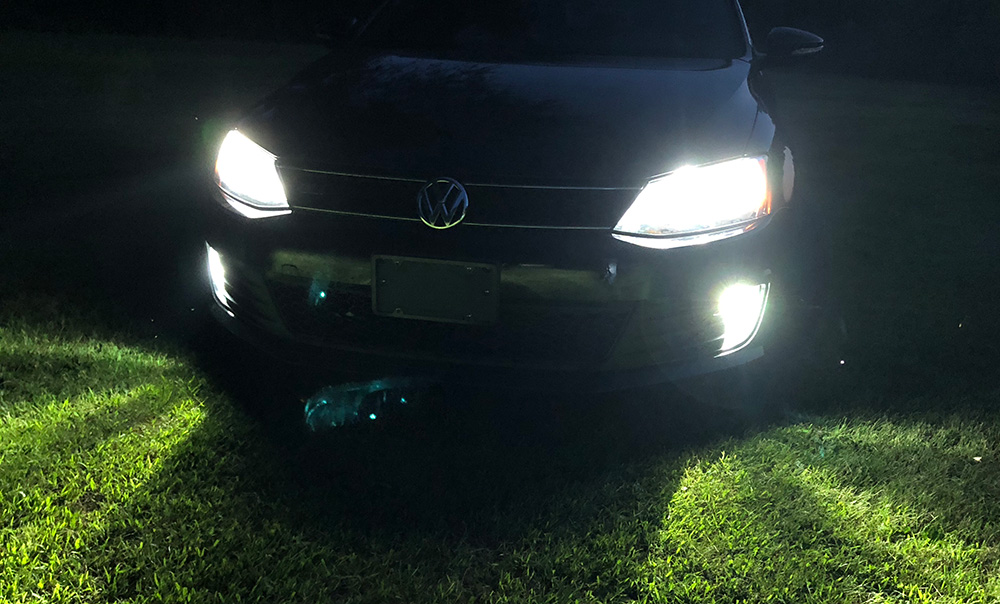 So how much do these cost? About $135 with free shipping after coupon code FACT10 which takes 10% off. Now this also includes the quality of the components. The best warranty we found on Amazon was 3 years, where most were 1 year. Not bad at all, but DeAuto offers a lifetime warranty. Is it legit? It sure is! Before I started talking more directly to the DeAuto group, I had some issues with some DRL LED bulbs I bought, which come to find out was actually a bad ground on my own car, but they sent me a replacement set, as well as a special set to try. Best customer service one could ask for. Don’t believe me, just check out vw vortex forums, you’ll see them constantly replying and helping out the community, great to see!

If you’re asking yourself why we didn’t compare to other ‘premium’ kits, it’s simply because we haven’t purchased them yet, but we do plan to soon! So be sure to check our website for new test results often.