The new 3.0 Stroke LEDs are a nice refresher to the old 2.0 model, and we were excited to get this in our lab for testing. We watched the promotional videos by Morimoto, and while we are always skeptical by marketing, we tend to see results in line with the claims from the Morimoto group.

As a quick reminder, we are an unbiased testing group, dedicated to bringing you actual results. We purchased a set of 2Stroke 3.0’s to ensure nothing what cherry picked. Now let’s get into it!

The 2Stroke 3.0s really shine when it comes to reflector style headlights. They use the smallest size diodes we have seen yet made by OSRAM, and have particularly low spacing from side to side. What does this mean though in terms of performance? Performance goes hand in hand with the beam pattern and hotspot, particularly a good spread of light as well as a long throw of light from the headlight (distance).

The low beam peak lux was 1022 at 25 feet (compared to our control halogen bulb at 373 lux), which amounts to 174% additional distance, or over 2.5X light throw. While they don’t take the #1 spot, the beam was so perfect, they are still strongly recommended. Our beam score is initially set 5 stars, but the Morimoto’s really raised the bar in terms of beam pattern. We have again seen nothing like it and would be fooled to think the original halogen was installed but with an upgraded color and output of course. 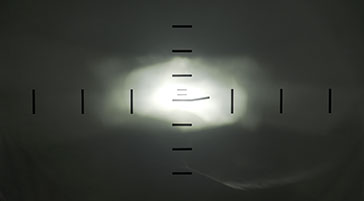 High beam performance was about on-par with other top LEDs at 1821 peak lux (vs 876 from halogen at 55w). This should bring your viewable distance to about 2X the distance, or 108% additional throw. If you utilize your high beams enough, we would highly recommend the upgrade. Generic and cheaper LEDs typically fall short in the high-beam category, but the 2Stroke 3.0s don’t disappoint here. Beam pattern is also great in the high beams and keep a tight and strong hotspot like halogen putting down the light where it matters the most. 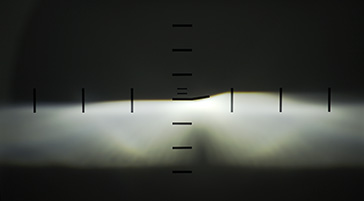 When it comes to projectors, we were just as excited due to the incredible diode design, but unfortunately the 2Stroke 3.0s fall short due to the handle design. While it works great for reflectors, they performed poorly in our various projectors.

In terms of low beam performance, they brought in 314 lux (vs 230 lux in a halogen). In a high beam projector (both standalone and bi-halogen) they brought in less light over halogen. This is more typical though for LEDs due to projector design, and only a few LED products we tested actually outperformed halogen. 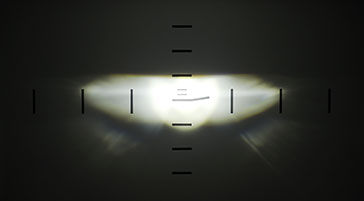 The beam pattern was acceptable, but had a lot of cut into the beam, which would case the dreaded dark spot at the bottom of the beam hiding important area down the road.

Color temperature is always a strong suite of Morimoto. The claim is the same 5500k from their last model 2Stroke 2.0s, but where the 2.0s cam in near 5250k, we tested the 3.0s at 5300k. Pretty close, and discernable between the two.

We are in love with the lower color temperatures when it comes to LED, as a color closest to 5000k will bring a nice pure white tone with no blue whatsoever, and with the Stroke 3.0s you’ll be hard pressed to find much blue at all.

A lower kelvin color temperature is better for ‘overall’ weather, or ‘inclement’ weather as it’s often mentioned. There is a lot of debate on what the best color is, but we see LEDs in factory headlights typically arrive around 5250k (Mercedes likes to go the blue route to stand out), and there much be a reason for it. 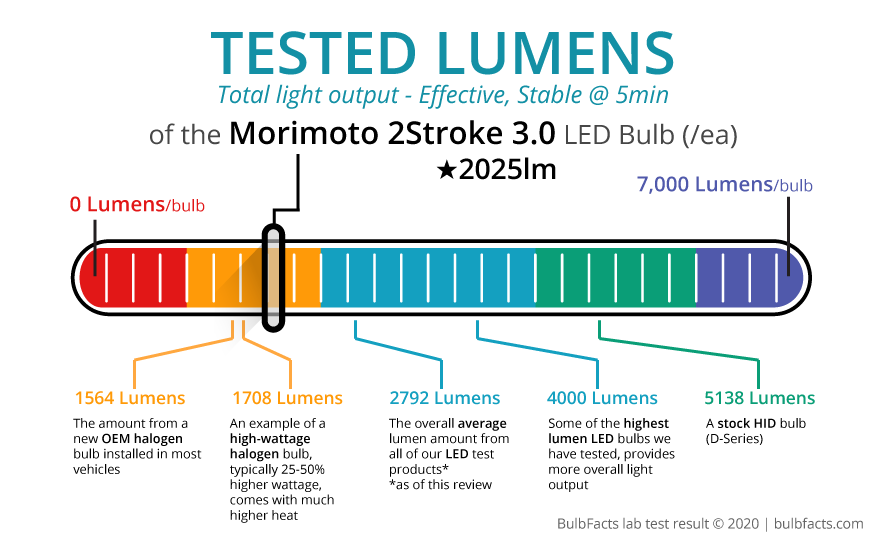 Morimoto skipped the lumens fad and focused on the beam output. The 2Stroke 3.0s came in at 2025 lumens per bulb, or just over 4000lm per kit. This was after 5 minutes of runtime and mild cooling. They don’t come close to something like the DDM Tuning SaberPro 50w model at over 6000lm per bulb, so don’t expect a blast of light, but what they do right they do well, which is again the beam.

Oddly, their claim was 2600lm per bulb, so they fell short on their claim there. Of course various test procedures will yield different results, but we can confirm that our lumens test is a bit generous overall.

LED diodes used in the 2Stroke 3.0s are again made by OSRAM, in particular the Oslon Black Flat S model, which is brand new to the market. We are not sure if Morimoto has exclusivity with these or not, but I wouldn’t doubt that others try to follow suit later on, much like the Philips Lumileds fad.

Power draw is a meager 22.6 watts per bulb, which isn’t a bad thing of course. The benefit to a lower draw is the potential to keep the diodes cooler (in addition to the on-board cooling system of course). Their claim is 22w/bulb, which was spot on.

As with all LEDs, we test them in various CANBUS vehicles when possible, and the 2Stroke 3.0s did not throw up any errors in this case, unlike their predecessor 2.0s which errored out unless used with decoders. This isn’t to say decoders wont’ be needed of course. If you a sporting a Ram, newer GMC or Ford, and so on. We would still recommend them. It’s a common question, and the only real answer is finding somebody else who is running the exact same product in the exact same vehicle. We have even seen this vary in some EU vehicles where everything matches up, but one person has success, and another does not. It’s a phenomenon only withheld by the automotive manufacturers. When in doubt, grab a set of decoders (or ‘anti-flicker’) modules. As even if they don’t seem to be needed, they help in taking the uneven power from the vehicle and smoothing it out (with the built-in capacitor) which prevents potential flickering, and of course bulb-out errors. They may even extend the life of the LED product.

The bulbs run a bit warmer than other LEDs, but this is due to the cooling design. They cool from within the front side of the headlight vs. the rear like all other LEDs. This is a great idea in our opinion, as there is typically much more room inside of the headlight. As you drive, air passes in front of the headlight and not the rear, so there will be extra cooling occurring in most cases. If you live in a part of the region that sees snow and/or cold climate, the benefit of this style of cooling is that they warm up the headlight like the halogen used to, keeping your headlights from icing over. They don’t warm up as much as a halogen bulb, but they should still prevent any ice in most cases.

If you run them outside of a housing, they are quite the noise makers, however of course as they get installed, they are nice and quiet. The fan spins at a higher than normal RPM, so just be sure they are secured inside of your headlight or fog-light to keep them from reverberating.

We were astonished when we continued to lower the voltage on the 2Stroke 3.0s. Most LEDs struggle when going below 8v, which is required by DRL systems to dim the bulb, however the 3.0s dimmed down all the way to 3.5 volts, while holding a useable lumen/output count. Some other LEDs will dim down pretty low, say around 5 or 6v, but they are very dim to the point of unusable in the day time, the 3.0s stay bright. I would just stay away from using them in a high beam DRL, as they will probably be too bright.

There are only a number of LED products on the market that have the ability to clock (or rotate), and the 2Stroke 3.0s allow for perfect alignment by allowing rotation by any increment. Normally not an issue, however a necessity in some vehicles to gain a perfect beam.

Size is about average with other LED products, but come with a bit of a slimmer heat sink like the last generation. The cable now exists the size vs. the rear, which was an issue for a lot of people with limited space.

They hold an incredible 3-year warranty form Morimoto, which is among the best in the industry. Morimoto is known to provide great customer service and are highly regarded in the headlight expert community. The expected product life should extend way past 3 years, but it’s always good to have nice coverage just in case.

At $175 per set, you may ask yourself it they are worth it. Check out BRI Source as they offer free Priority shipping.

For somebody looking for an exact replica of a halogen bulb, but in LED form, there are going to be it. With a perfect beam pattern, ideal color temperature, quality casing, extreme dimmability, and optimized cooling, they are the most unique LED bulbs we have seen yet, and come highly recommended for a true enthusiast.