The successor to their XtremeUltinon (first generation and second generation), the Pro5000 and Pro9000 by Philips are a completely new design, and it shows. If you are somebody looking for a beam pattern that is somehow more accurate than your original halogen bulb, look no further than the new Philips Pro Series LEDs.

As a quick reminder, we are an unbiased testing group, dedicated to bringing you actual results. We purchased both sets from Philips to ensure nothing what cherry picked. Now let’s get into it!

Getting right into the best part of the new Ultinons is the reflector beam pattern. While testing these out, we were instantly stunned when we seen how the new diode design performs in our reflector headlights. We did not know what to expect as we have never seen this specific design on any other LEDs available. 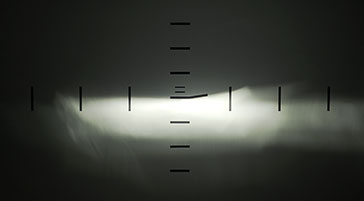 Most halogen reflectors will produce some glare for street signs and the like, and when you decide to upgrade to LED, well then you typically increase that glare due to the much higher output due to the technology. There are numerous LED designs to combat this and focus the beam the best way they possibly can, but the new Philips LEDs must have spent quite some time designing and testing to achieve a perfect beam which they are calling ‘SafeBeam technology’. Yes, we said perfect. And we literally re-thought the way we rate the beam patterns. A halogen bulb used to rate 5.0 stars, but the Philips LEDs have a better beam over a halogen, so a halogen is now rated a 4.5, while the Philips LEDs are rated 5.0 stars. This is of course always subjective, and we are not saying a halogen beam is bad, because it is designed to do exactly what it was meant to, but because the Philips LEDs are producing a projector-like beam, we had no choice but to change our rating scale. They have simply raised the bar. 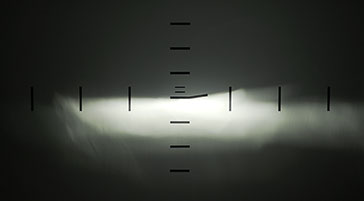 The only other product that comes close in this category are the new Morimoto 2Stroke 3.0’s. The diode design is incredibly small on both the Philips and the Morimoto, with the difference being the Philips set has a floating style diode, which seems to be the special property needed for the sharp beam pattern.

Ok so enough about the beam! It’s good, we get it. How does this attribute to the actual light output? Well the beam goes hand in hand with the output in lux, or so referred to as distance. 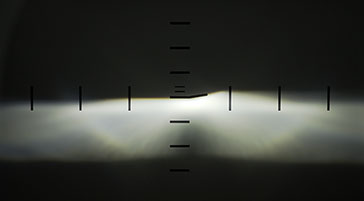 LEDs tend to struggle when it comes to projector style applications, and the new Philips Pro series are no exception. That’s not to say they don’t provide a good upgrade over halogen, but the question is are they worth the money? There are certainly better options including an HID conversion. While the Philips provides an incredible beam, because of that goal, they fall short in a projector where a very large upgrade is needed to combat the design limitation of LEDs. The floating diodes do not seem to help when it comes to the beam pattern in a projector either, as they too produce the typical dark spot near the bottom. Not a big issue as the hotspot is very good, but for some it may be a turn off. 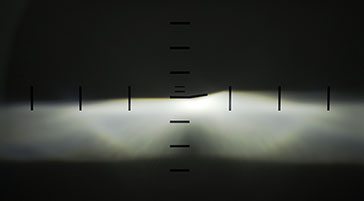 So how did they shine in a projector? The Ultinon9000’s scored a 2.3 stars overall. Compare that to a halogen at 1.5 stars, and there isn’t a huge difference. The top performing LED (DDM Tuning SaberLED ProX 55W Accu/V2) as of this review scored a 5.8 stars due to their incredibly high powered output which blasts through the LED limitation and produces very high output. 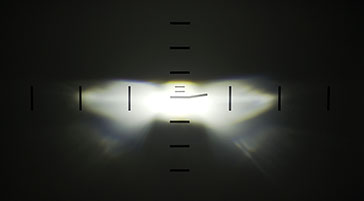 The Pro9000’s put out a respectable 411 lux at 78% additional light in the low beam, and 434 lux in the high beam, which is identical to our OE halogen bulb.

Simply put, skip these for your projectors, and go HID or a higher powered LED product. Color temperature is highly subjective, and everybody seems to have a different opinion about what the ‘best’ color is. Halogen will be around 3500k, which is a mild yellow tone in the beam. OE HID is closer to 4300k. More white, but still a small tone of yellow. LED is typically closer to 6000k providing a blue tint to the overall white beam.

How did the new Philips LEDs output? We tested them both (Pro5000 & Pro9000) right at about 5000k, a pure white with no yellow, no blue, just white. This is the overall/averaged score of course from all parts of the beam including inner and outer portions. By the eye, they look white.

When we come across an LED with a color CLOSE to 5000k we get excited, and these hit the nail on the head. If you are installing these into a reflector headlight, they will appear more natural and won’t stand-out as much as some others. Quite the perfect color temperature in our opinion which works well for all types of driving conditions including clear, rainy, snowy, and so on. 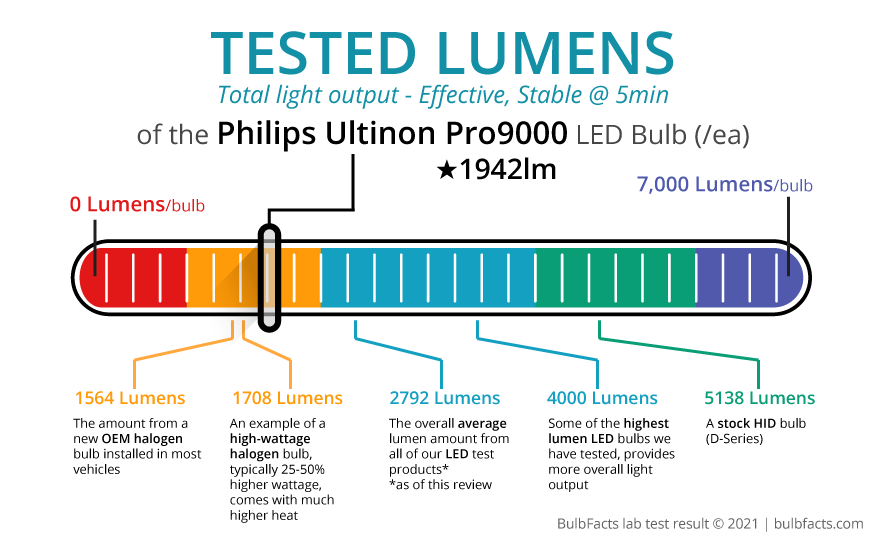 Lumens are not a strong suit of any Philips LED including the Pro Series, but that’s not necessarily a bad thing. The focus is on the beam pattern, and not how much light they can throw. Some people want ‘more’ light, and some want a better beam. You can’t have it both ways, and going with the Pro9000’s or Pro5000’s you are getting a beam pattern like no other over total light output (lumens).

*Lumens are tested at initial startup (typically much higher as expected), 2 minutes (initial warm up), and 30 minutes (full warm up). The percentage value comes from the difference between 2 minutes and 30 minutes.

We mentioned the floating diodes (as we called them) previously, but they are essentially what drives these LEDs to beam perfection. They use Lumileds TopContact LED chips, brand new from Philips, and only currently used on their own sets. When they decide to distribute these elsewhere is up for debate, but I wouldn’t expect it anytime soon, so you’ll only find this technology on these sets for now.

Cooling is your typical fan style built inside a heat sink. It works well, and is nothing special. However it’s worth mentioning that the Pro9000’s seem to use a higher grade fan, as the noise is diminished at only 59db, compared to the Pro5000’s at 65db. Both are very stable with no vibrations, so they shouldn’t cause any fuss when running in your vehicle, even when the engine is not going.

We experienced no issues testing them on our CANBUS system. No pre-errors, no full-time errors. This is surprising considering there is no external driver which is usually required to combat these systems. Philips somehow built it right in at the LED itself.

We don’t have an official category for it (as we don’t yet test for it), but because it’s advertised, we wanted to mention it. The lifespan. Philips is claiming 12 years lifespan on these. And because they are the largest brand maker in LEDs, we don’t doubt that claim. Again, we do not test LED lifespan/longevity yet, so take that with a grain of salt.

The Philips Pro LEDs are like most others that do not have the ability do DIM, and are not well suited in a DRL unless you can live without the DRL or it’s legal in your area (ie. Canada). They didn’t exhibit any flickering at a lower voltage (ie. 6v), so all that will happen is that they simply won’t power on at all.

The Philips have always been a strong believer in the ability to clock, or adjust/rotate. This allows for the installer to adjust the collar in order to achieve the best beam possible. While testing in our headlights, we didn’t have to make any adjustments, and the beam was perfect, however in some vehicles, they may install on an angle which can throw the beam off losing the most important hot spot (distance), so it’s critical the beam is always checked when installing.

The size of the Philips LEDs are small. No external driver, which is a huge bonus for those with limited space available. The size of the heat sink/fan, as well as the diode handle is also smaller than the typical LED. They are also very lightweight, which usually translates to a cheap plastic product, however the Philips LEDs are incredibly high quality while maintaining a light weight. They feel feather like compared to other LEDs, like a crescent as Darryl would say.

Philips provides 2 years of warranty out of the box, however if the purchaser registers directly with Philips, they extend it to 5 years. This may be limited however to certain countries, but we couldn’t find any exclusions. We don’t expect any issues being a Philips product, however it’s always nice to be covered. If you are looking for the very best beam pattern available today, while maintaining a pure white color temperature, the Philips Pro5000 and Pro9000’s are a great buy. The Pro9000 variant is naturally more expensive over the Pro5000s, so you’ll have to decide if the higher output is worth the price.

Sizes are limited though, as always with Philips bulbs. But where the older X-tremeUltinon’s only had two sizes available, the Pro Series now offers more choices.